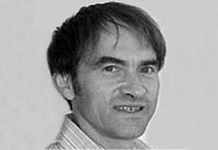 ÜBER MICH:
Giorgio Rucli, PT, was born in Cividale, Udine in Italy. After an initial career as a professional athlete for the National Italian team, starring in hurdles and decathlon events, Giorgio Rucli completed his Diploma in Physiotherapy in 1986. He has been working in private practice since 1991 and has studied with M. Bienfait, completed courses in Postural Re-education and Orthopedic medicine according to Cyriax. From 1991 to 1996, he was the team physiotherapist of several professional soccer and basketball teams in the north of Italy.

AUSBILDUNG:
Since 2008, Giorgio teaches manual therapy techniques to physiotherapy students at the University of Udine. He began studying Fascial Manipulation with Luigi Stecco in 1996, and continued on-going training in this method to become an authorized teacher of this method in 1998. Since then he has taught courses extensively in Italy, Poland, Usa, Israel and has presented Fascial Manipulation during different conferences in Italy, Netherlands, USA, and Norway
Rucli is part of the founding members of Fascial Manipulation.